We are so grateful for our team of Volunteer Teaching Artists, who work endlessly to bring transformative arts experiences to the children we serve. Thank you for making our programs possible this summer! 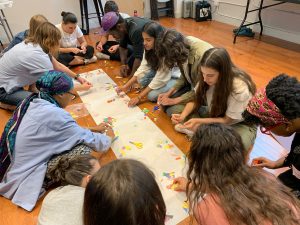 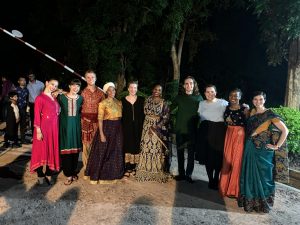 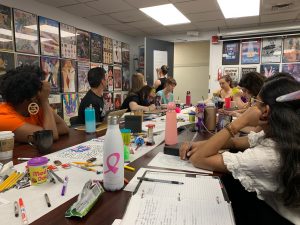 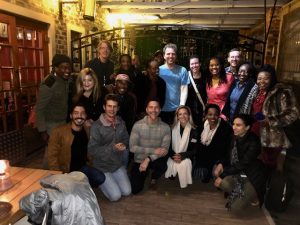 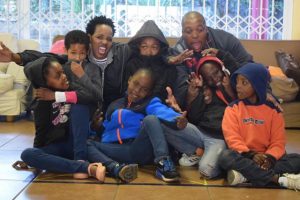 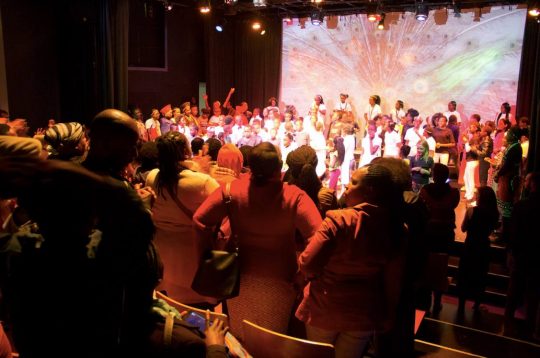 Since 2011, artsINSIDEOUT has gathered a group of working artists and students who have been personally affected by HIV/AIDS to travel to areas of the globe that have been hit hard by the AIDS epidemic and to connect with young people and mothers who have been similarly impacted. In June 2016, artsINSIDEOUT organized its sixth annual two-week arts intensive at Nkosi’s Haven in South Africa, which offers holistic care and support for mothers living with HIV/AIDS and their children, including orphans.

The theme for camp this year was “Zazise!,” a Zulu expression that means “introduce yourself.” Over 80 kids and 25 mothers took part in a variety of performing and visual art classes led by a team of 18 ASTEP Volunteer Artists that culminated in a show for the entire community at the historic Market Theatre in Johannesburg. The schedule is challenging: two-weeks to create, rehearse, stage and design a show but the final performance was incredible!

Thanks to our stellar team of Volunteer Artists who made this all possible! 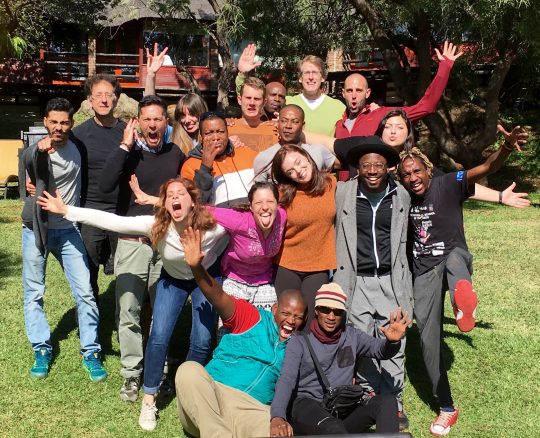 In preparation for a game I want to play with the kids at Nkosi’s Haven, “Trivial Pursuit: The artsINSIDEOUT Edition,” I compiled a list of the volunteers who’ve been part of our team since our first program here in 2011: 53.

I was astonished.  I was thinking, “It must be over three dozen.”

Since Kobi Libii (Team Member 2012-15) suggested that artsINSIDEOUT expand the number of South African artists on its team—which in each of our first two years totaled two—we’ve done precisely that.  This year, 8 of our 18 team members are South African.  One of them is a Co-On-Site Administrator, a crucial role in managing a team this large.  Another is our director, who will decide how the work the teachers are doing in the classroom will fit together in a presentation that is cohesive despite having been developed simultaneously in two different classrooms.  And of our nine returning teachers, six are South African.  The result is a community of artists that I’ve come to love and admire, and that can (and do!) take the kids to shows, dance concerts, interactive arts festivals and all sorts of cultural outings year-round.

The expansion Kobi and I discussed in 2012 is so complete that virtually all of artsINSIDEOUT’s classes are taught “zonke-bonke.”  Both are Zulu words; zonke (pronounced zonky) means “ all of it” and bonke (pronounced bonky) means “all of them.”  Practically speaking, it means using English, using Zulu, using all cultural references available, none with more weight than the other, none understood by everybody which makes all of it understood by all.

Another thing that floors me is how the kids remember songs and exercises we taught them in 2011, and touched on since.  Some of the veteran ASTEP volunteers are dumbfounded when they start teaching a fairly complex game with words and movement.  They get three words of instruction out, and the kids are off and running.  In some cases, these are children who are too young to have been part of artsINSIDEOUT in those early years, so they’ve learned the games from the older residents here—and learned them perfectly.  The history of artsINSIDEOUT is now part of their history.  Indeed, for the kids under 13, they can’t remember a time when artsINSIDEOUT didn’t show up every June for a few weeks of intense arts training that culminated in a show.

They are thrilled that, once again, this year’s show will be off-campus at the Lab at the Market Theatre—the Market Theatre being where Athol Fugard developed many of his groundbreaking, Apartheid-shattering plays.  We’re expanding our time off-campus, too, this year: we’ve rented several nearby studios so we’ll hold classes off campus for the entire second week, and we’ll be able to more effectively integrate the younger kids into the production, and the moms as well.

Speaking about the moms, the second most significant change in artsINSIDEOUT is the inclusion of the moms.  It started as one-off workshops the held by the teachers, and the response from the moms was so overwhelming, in 2014 we added two moms teachers to focus on the mothers.  So much of the moms’ energy and focus is on the children, and for them to be the center of attention for a change brings out the most unexpected, moving and fun colors imaginable.  Working with the moms is truly zonke-bonke because, in general, the moms are not as fluent in English.  Working with them is also what’s made artsINSIDEOUT part of the entire community here.  They’ve made us part of the Nkosi’s family.

A team of 18 Volunteer Artists recently wrapped up artsINSIDEOUT2015, which took place from June 28 – July 11 for over 150 kids at Nkosi’s Haven, a residential facility for mothers and their children who are affected by HIV/AIDS. In addition to the traditional visual art, storytelling, music, and dance workshops offered, this two-week arts camp offered an engaging stagecraft class! The program culminated in a final performance at the historic Market Theatre in Johannesburg for the entire community — it was an inspiring evening for everyone who participated. For a chance to see the show, check out the video above!

The single most determinative factor in the lives of the people we work with will be their ability to tell their stories and to believe that their stories matter.

My job is to educate through the arts: to model human, share perspectives, and broaden the imagination of our young students.

Through the stagecraft class we implement the set design for the final show that we are creating with the children. In our class each student is granted the freedom to be creative and responsible. We guide them so they can give their best without fear of making mistakes, laugh and learn from them creating beautiful arts expressions.

I get up early in the morning to start to work with the section of kids with the incredible team of kids, aged 5 to 12 years, who have tremendous energy and a huge desire to help in any way they can. The discipline and brotherhood is important in our work, they listen to each other and respect the decisions of their peers, which is a fundamental part of our education. After lunch we work with the next group of young girls and boys between the ages of 13-18 years old. It is WONDERFUL to have this gender diversity because it makes us a unique and special group providing opportunities to all alike, breaking the stereotypes that the only ones working on building scenery and lighting are involved with men.

The creativity and discipline of these students are amazing and I have no doubt at all that our final stage will be a beautiful and artistic collaboration from all of them and for the rest of the majors: music, dance, improv, storytelling and also Mums. Our main interest is that by recycling all materials that we see in our surroundings, we can make big scenes without relying on big budgets and because they simply do art inside and outside of major infrastructure, having less is more. I love art, I love my work as an artist and educator, and this experience lead me to love education. I learn that to be a teacher in the arts you have to be open and involved in the needs of each individual and merge with the group, so we all learn at the same time, so all we educate taking initiatives that refresh our values ??and our knowledge in everyday life. I love being here at Nkosi’s Haven in South Africa helping, sharing and learning with all this unique people, and it seems like I was living here for months. Being a good teacher requires enthusiasm, interest, love, consciousness but especially to be a guide to freedom of knowledge for each of our students.

Thank you to each of the Volunteer Artists who made this entire experience a success! We couldn’t have done it without you: 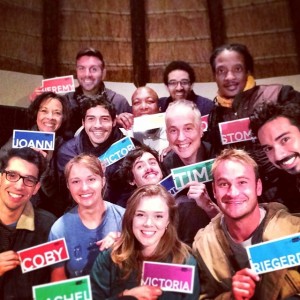 For a fourth year this summer, artsINSIDEOUT spent two weeks in Johannesburg, South Africa serving the children of Nkosi’s Haven, a center that offers holistic care and support for destitute mothers living with HIV/AIDS and their children, including orphans. Through acting, singing, dancing and storytelling techniques, a team of 14 Volunteer Artists inspired the children to unleash their creative energy, empowering them to communicate their own experiences. There was even a special stagecraft workshop where the students built a permanent stage that can be dismantled and stored so we can use it every year!

For a third summer, ASTEP supported artsINSIDEOUT, a unique group of students and working professionals in the performing arts who have been personally affected by HIV/AIDS. They traveled to Nkosi’s Haven in Johannesburg, bringing acting, singing, dancing, story telling, and the visual arts, inspiring Nkosi’s Haven youth to unleash their creative energy, empowering them to communicate their own experiences.

This year, artsINSIDEOUT made it a priority to include four South African artists on their Volunteer Team. By integrating the American/South African teaching team, their work could be sustainable year round, even when they’re back in New York City. It would also add an element of cultural exchange among the teachers that could only deepen the work to the benefit of the students.

Check out the artsINSIDEOUT Blog for photos, videos, and volunteer testimonials!