“You are all doing exactly what the title of your organization says that you are doing.
You are: “Artists Striving to End Poverty.”
– Judy Juster, Clinical Coordinator/After School Program Director at Abraham House 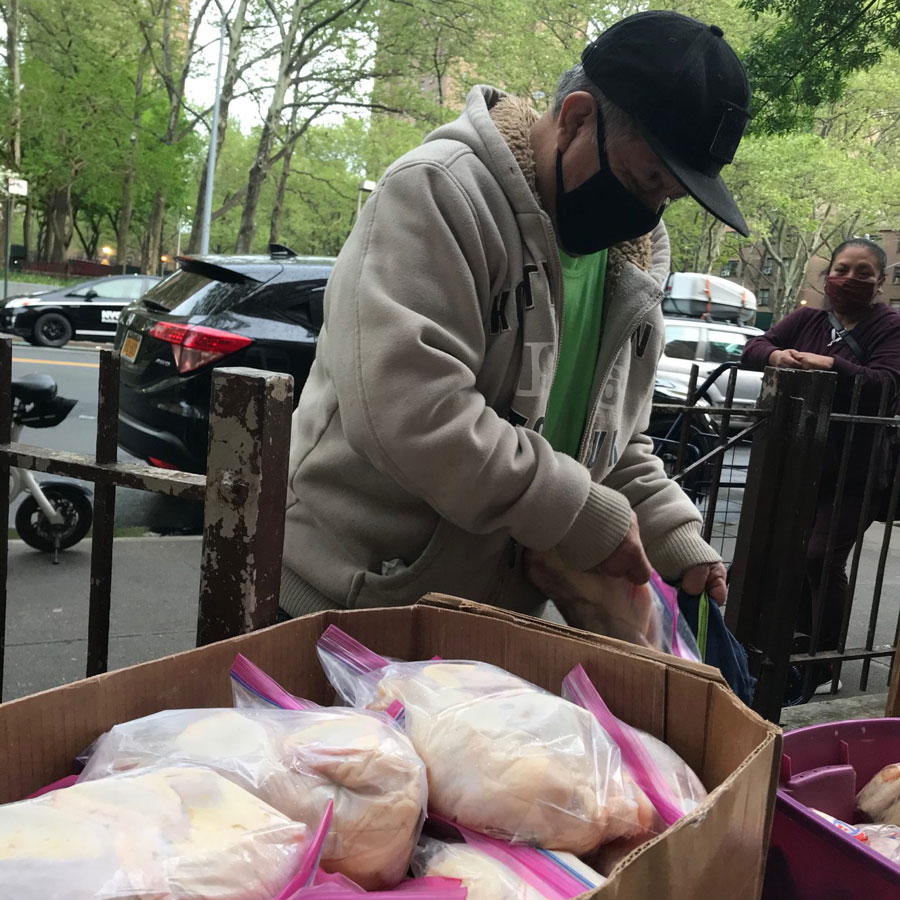 We are excited to share the news that ASTEP has started a food distribution program, Filling the Food Gap, in partnership with the Red Hook Container Terminal and the NYCEDC. This program provides direct service, food distribution, to one of our partners Abraham House located in the South Bronx.

Over the past month, donations of fresh vegetables, fresh fruit, poultry, and meat have been delivered to support the students that we serve, as well as their families and the greater community. Many people who received food were excited by the quality of the food, as well as the fresh poultry and beef, as the majority of donations have been canned goods. With this program, we have been able to provide 3 deliveries of fresh food to over 1,800 people!

Check out this NY Daily News article that features Mike Stamatis, the owner of the container terminal, and the impact these donations have had.

To help us to continue supporting the needs of the communities we serve during this difficult time, please consider a donation to ASTEP’s Arts Resilience Fund.

Created in 1971, the award honors individuals or organizations that best exemplify and practice the principles to which Mr. Robeson devoted his life: dedication to the universal brotherhood of all humankind, commitment to the freedom of conscience and of expression, belief in the artist’s responsibility to society, respect for the dignity of the individual and concerns for and service to all humans of any race or nationality. The award was voted on by members of the Actors’ Equity Paul Robeson Committee, chaired by Allyson Tucker Mitchell.

ASTEP was conceived by Mary-Mitchell Campbell and students at Juilliard, where she was on the faculty from 2003-2009 and continues to conduct workshops, with a mission “to transform the lives of youth using the most powerful tool they had: their art. Today, ASTEP connects performing and visual artists with underserved youth in the U.S. and around the world to awaken their imaginations, foster critical thinking, and help them break the cycle of poverty.” Among its many programs, ASTEP runs a six-week summer arts academy for refugees, provides volunteers in a nursing home to work with kids in Washington Heights, focuses on children with HIV and other health challenges, as well as conducting performance workshops in homeless shelters and community centers, all run by a network of dedicated volunteers.

A major fund-raiser is planned for December 12, 2016 as ASTEP’s Annual Christmas Concert will be held at Joe’s Pub in downtown Manhattan.

“We are so incredibly honored to be given this award, and we are grateful to the many artists that have volunteered with us and continue to work toward creating better lives for young people,” says Campbell, who continues to serve as ASTEP’s Executive Director.

When not at ASTEP, Campbell has a busy musical career. Broadway shows for which she has served as Music Director and/or conductor include The Addams Family, Company, Tuck Everlasting, Finding Neverland and My Love Letter to Broadway, Kristin Chenoweth’s upcoming limited engagement concert at the Lunt-Fontanne Theatre.

The Paul Robeson Award will be presented at 2pm on Monday, October 24, 2016 at the Eastern Regional Membership Meeting of Actors’ Equity Association in the Council Room on the 14th Floor of the Equity Building, 165 West 46th Street in New York City.

The Actors Equity Foundation, a philanthropic and humanitarian nonprofit organization, was created in 1962 to aid and assist the members of the acting profession and to promote the theatre arts. It is separate from Actors’ Equity Association and is funded by estate bequests and individual donations.

For 59 young artists interested in combing their artistic practice with their pursuit of a better world, ASTEP presented our 2nd annual Artist as Citizen Conference from June 7 – 12, 2015 at The Juilliard School.

At ASTEP, we work with children. We put artists in classrooms around the world to share their passion with kids.

In a larger sense, we’re part of an evolving, nationwide conversation on the role of the artist in society. There are articles published on the subject everyday – the landscape of the arts is changing and so are the opportunities available to artists. Meanwhile, the social emotional skills the arts help to develop are increasingly viewed as essential for success in today’s knowledge-based economy.

The Artist as Citizen Conference is an opportunity for ASTEP to help spread this powerful ideal nationwide — and with it, the remarkable culture of service it represents.

It’s been talked about for years. Innumerable blogs have discussed it. The New York Times recently chimed in. There is a movement afoot. A return to meaning in the arts. A return to impact. As one curator put it, “Marcel Duchamp’s toilet is being returned to the bathroom.”

The Conference is about putting the riches of the first network at the disposal of the second. Its mission is to celebrate, connect, and develop young leaders in the arts by providing them with a transformative artistic and educational experience in the heart of New York City.

Why? Because developing motivated young leaders in communities across America is a way for ASTEP to expand the reach of its mission exponentially.

For the past several years, ASTEP has worked closely with the Social Justice and the Arts Program at Santa Clara University so we’re excited that the students there have officially created Santa Clara ASTEP, an ASTEP Student Chapter. Led by Co-Presidents Nick Manfredi and Tennyson Jones, the student chapter will focus on organizing the pre­-existing spirit of artist ­activism on campus into compassionate engagement with the Santa Clara and San Jose communities.

“When Mauricio Salgado, ASTEP’s Director of Programs, visited the Santa Clara campus last year, he sparked a new way of thinking for the theatre and dance artists on campus. Located just minutes away from San Jose, a city with over 15% of its population living in poverty, Santa Clara University and its artist ­activists are called to the ASTEP mission.” — excerpt from the Santa Clara ASTEP application

When asked what they plan to do, they shared the following:

Cultivate Future Leaders Through the Arts!

Since 2003, ASTEP has been cultivating a community of artists who make using the arts a tool to empower youth a primary part of their lives and practice. We would like to invite your school to be a part of this growing community and see first hand the transforming power of the arts.

Through a series of one, two, or three-day workshops, ASTEP will engage students at your school in an exploration of using the creative arts as a tool to support an individual or community:

* Fees do not include the cost of travel. Scholarships are available for qualifying schools

“The Devising with ASTEP workshop was the highlight of my week at KCACTF. Thank you so much for showing me what a strong future exists for artists hoping to help humanity. I know, with whatever I pursue in life, I want to help people. If I am able to help people through something I enjoy, well, there isn’t a better combination!”

ASTEP is thrilled to partner for a second year with the Kennedy Center American College Theatre Festival (KCACTF), a national theater program involving 18,000 students from colleges and universities nationwide, to enhance the quality of college theater in the United States. ASTEP will be leading two workshops, “Artist as Citizen” and “Devising with ASTEP”, and joining a prestigious panel of judges for the Irene Ryan Acting Scholarship. (Check out our 2012 experience!)

Do you believe in the power of Art to transform communities? This interactive workshop will focus on how we can delve beyond our technical training to harness our collective power and begin to build a space where everyone’s stories can be heard. Together, we will explore how we can use our craft as a means of ensuring the strength of our communities, our culture, and the future of the American theater. Come and reclaim ownership of your own artistic fulfillment.

ASTEP artists live at the intersection of the Arts and Global Justice. In this workshop, we’ll be building original pieces of Devised Theater using ASTEP’s unique process-oriented approach. Drawing from your own personal experiences and ideas, a few inspiring prompts, and techniques for devising that an ASTEP facilitator will guide you through, participants will create pieces around a common theme.

We’re mid-way through the festival! Sharing updates from each of the eight regions visited so far are returning ASTEP team members:

Even after graduating from Walnut Hill School for the Performing Arts, where they led an ASTEP Student Chapter, this dynamic and inspiring group of students continues to champion ASTEP’s mission. While navigating their first few months as freshman at several different Boston colleges and conservatories, these students knew they wanted to stay involved with our work. They created a play and performed it as a fundraiser for ASTEP. Estrogen & Testosterone debuted with two shows on January 12, 2013 at the 45th Street Theater Jewel Box in NYC, raising over $1,400  to benefit ASTEP’s programming! We are so proud of their commitment to using the arts as a force for social change. For your talent, dedication, and creativity– Jake Evans, Daniel Hutchins, Serena Kassow, Alynn Parola, and Renee Richard — we thank you for being leaders in the ASTEP community!

ASTEP believes that access to the arts changes lives. Our Volunteer Artists dedicate their time and talent to using the arts to engage children, excite them about learning, and develop essential academic and social skills. Click on the video links below to learn how!

The holiday season is in full swing, thanks to all who participated in our annual holiday benefit, which was a huge success!

ASTEP would also like to thank Havana Central Restaurant and Bar for donating food for our guests!

Check out Playbill’s coverage of the event!