Marcus Crawford Guy, a 2018 Jennifer Saltzstein Kaffenberger Fellow, will be sharing monthly blog posts about his experiences teaching the arts through ASTEP on STAGE! This program gives over 1,500 NYC youth access to the transforming power of the arts by bringing performing and visual artists from the Broadway and NYC community to after-school and in-school programs. ASTEP on STAGE! partners with schools and community organizations serving youth affected by the justice system, incarceration, gun violence, homelessness, immigration status, systemic poverty, and HIV/AIDS. Through the arts, these young people learn they have what it takes to succeed no matter the obstacles, which is key to breaking cycles of poverty. 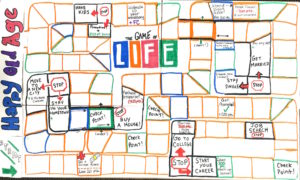 We’re playing the Game of Life. Well, actually, we’re working with students to build it, asking them to complete the board with events, choices and circumstances that will shape their play in our final class this Thursday – “Remember to bring dice, Mr Marcus – that spinner thing won’t do!”

We’re working in a juvenile correction program at Passages Academy, where the common trait among all of the students is some kind of criminal charge, though we don’t get into those conversations. It’s a given and we work hard to move beyond that to build a creative and productive classroom environment. But with an ever-changing community, the politics are clear and while some infractions are considered “cool”, others are unanimously agreed upon as unforgivable. Regardless of the specifics, these factor entrench the students in a highly complex social environment. So when I posed the question: “What’s a negative event that could happen in your life?” it’s unsurprising that the answer was matter of fact “go to jail” because, generally speaking, it could be agreed upon – no politics.

“Ok, well let’s think about something with lower stakes?” This caused a silence. “What’s something that could go wrong for me today that would affect me negatively but not be so high stakes as to cause me to break the law?” More silence. “Umm…you could stub your toe.” This was followed by a long and fairly intricate conversation about what feels normal, what feels bad, and what feels great for the students in their current state of being. The positivity and negativity associated with certain events exist on a sliding scale based on the privileges we are conditioned to. It makes sense and my upper middle class upbringing didn’t account for this.

Our dialogue about positive life events took a similar turn. The students weren’t willing to put events on the board that they couldn’t imagine for themselves. It was not productive, they said, to think about things that simply wouldn’t happen. I challenged this with the idea that if this was true, then thinking about the extreme negatives would only make them more likely to happen. So we agreed that we wanted to make a game board that felt realistic and true to the lives these young men were leading but that didn’t confine them to a certain realm of success or growth in the world.

And so, what was supposed to be a simple conversation about how we complete the game, became a complex discussion of what’s positive, productive and promotes success for this specific population. For the community in question, positive days felt like ones without negative interaction vs. being ones where something great happened. The latter just wasn’t in their realm of expectation.

As I gear up to play the game tomorrow morning, I’m thinking about how we can lift these students up, even when they are living with limited choices. How can they move forward and have lives that aren’t defined by their mistakes but by their potential to grow and move beyond this moment in their very young lives?