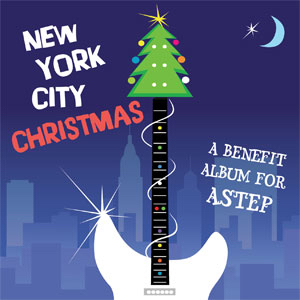 Celebrate the holidays with your very own copy of New York City Christmas: A Benefit Album for ASTEP!

New York City Christmas: A Benefit Album for ASTEP is a special labor of love created by the incomparable music director, orchestrator and arranger Lynne Shankel (Allegiance, Bare, Altar Boyz, Cry-Baby). This album features Broadway’s best singing fresh, original approaches—pop, soul, R&B, rock and more—to your favorite holiday classics, along with original songs that will get you in the holiday spirit! Each December, Lynne brings together some of the best musicians and singers in the Broadway to perform the album at the cozy and intimate Joe’s Pub in downtown Manhattan. Tickets on sale for the Dec 9, 2019 performance!

The album is available on Amazon, iTunes, Spotify, and Ghostlight Records.

To mark the tenth anniversary, a newly recorded single “All I Want For Christmas Is You” performed by Telly Leung (Aladdin, In Transit, Allegiance), has been added to the album, which joins added singles “I Got All I Need (This Christmas)” an original song written by Lynne Shankel and Jon Hartmere sung by Lindsay Mendez and Derek Klena and a hip-hop version of “‘Twas The Night Before Christmas” (music by Shankel) sung by Aurelia Williams (Once On This Island, In Transit), Kenita Miller (Once On This Island) and Kay Trinidad (Little Mermaid) based on the traditional poem.

All proceeds from album sales support ASTEP’s mission of connecting performing and visual artists with youth from underserved communities in the U.S. and around the world. Through after-school workshops and summer camps, ASTEP uses the arts to give youth the skills they need to become the best versions of themselves. Purchase your copy today and celebrate the transforming power of the arts!