February 7, 2017 – The Transport Group Theatre Company – which last night celebrated their 2017 Annual Gala with “An Evening with Mary-Mitchell Campbell and Friends” – honored the accomplished Broadway musical director and arranger with an evening of songs featuring the pianist herself at The Times Center.

Several of Campbell’s Broadway collaborators lent their talents to the evening, including Tituss Burgess; Raúl Esparza; Debra Monk; Melissa Errico; and Sierra Boggess. Video greetings were sent from Kristin Chenoweth and Jonathan Groff, who were unable to attend. Each performer told a short story to honor their friend, citing not only her musical talent but more importantly, her giving and loving nature and “for bringing so much love, music and grace into the world” through her efforts with ASTEP (Artists Striving to End Poverty) the non-profit arts organization founded by Campbell in 2006.

Jack Cummings III, The Transport Group’s Artistic Director, choked up when speaking of Campbell’s involvement of their first-ever project, the 2002 production of Thornton Wilde’s Our Town, for which Campbell composed, arranged, and directed the music. Citing her contribution as having arranged an entire score incorporating the Shaker song “Simple Gifts,” he said she created an expanded universe of sound for the production, and as this was the inaugural effort for The Transport Group, she was in effect their “birth mother” and they her baby, with her music ushering forth a brand new theatrical entity.

Mary-Mitchell, on accepting the award, thanked all her teachers who guided and supported her, and all the artists and directors with whom she had worked. Referring to ASTEP, she said “art has the power to transform lives …..” and that now, more than ever, “we need to make art.”

ABOUT ASTEP:
ASTEP was conceived by Broadway Musical Director Mary-Mitchell Campbell and Juilliard students to transform the lives of youth using the most powerful tool they had: their art. Today, ASTEP connects performing and visual artists with underserved youth in the U.S. and around the world to awaken their imaginations, foster critical thinking, and help them break the cycle of poverty. For more information, please visit www.ASTEP.org. 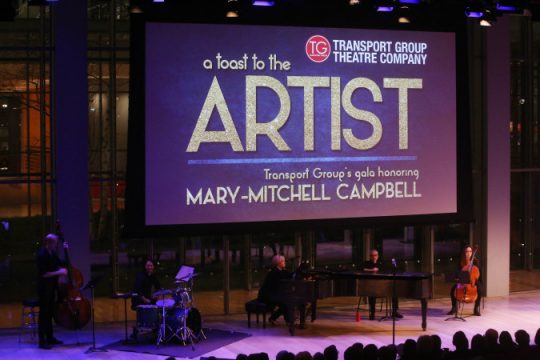 The holiday season is in full swing, thanks to all who participated in our annual holiday benefit, which was a huge success!

ASTEP would also like to thank Havana Central Restaurant and Bar for donating food for our guests!

Check out Playbill’s coverage of the event!

Celebrate the holiday season at an intimate concert to benefit Artists Striving to End Poverty (ASTEP)!

Backstage for Christmas: A Holiday Cabaret is produced and music-directed by Drama Desk Award-winning orchestrator Mary-Mitchell Campbell, who is also the Founder and Executive Director of ASTEP. Appearing with pianist Campbell will be Damien Bassman (drums/percussion).

All proceeds from tickets to the show and album sales go to supporting ASTEP’s mission to use the power of the arts to transform the lives of underserved youth. PURCHASE TICKETS!

Wine and light hors d’oeuvres will be served, and a silent auction will be held.

Artists Striving to End Poverty (ASTEP) was conceived by Broadway Musical Director Mary-Mitchell Campbell and Juilliard students to transform the lives of youth using the most powerful tool they had—their art. Today, ASTEP connects performing and visual artists with underserved youth in the U.S. and around the world to awaken their imaginations, foster critical thinking, and help them break the cycle of poverty.